All material and content on this site is strictly for educational purposes.

Welcome to the Master Universe collection of educational diagrams. This collection of artwork is offered freely to everyone without cost or copyright restrictions worldwide. You are free to use them any way you wish for educational purposes.

The Master Universe diagrams for public distribution are offered as high quality PDF files that you can print (see section Tips for Printing) and view on your computer or hand held device (we recommend a large screen for optimal viewing). In addition, the original drawing source files are available to those who may wish to do more with the drawings. These source files are available in fully editable SVG format and were created with the Free and Libre Open Source Software called Inkscape, which is available as a free download from their web site. To get copies of the source files, simply go to our Contact page to send us your request.


HOW WERE THE MASTER UNIVERSE DIAGRAMS CONCEIVED?

They were conceived through the collaborative efforts of several individuals, each with their own unique skills, and each having received one or more revelations regarding the subject at hand. These revelations were thoroughly analyzed and vetted, and rendered into the collection of Master Universe diagrams that is now at your disposal. It should be noted that some of the information contained on the diagrams was extracted from the Urantia Book, and that the depiction of the Master Universe closely follows the descriptions given in the Urantia Book.


WHO ARE THE MASTER UNIVERSE DIAGRAMS FOR?


WHAT IS THE PURPOSE OF THE MASTER UNIVERSE DIAGRAMS?

The diagrams are composed of schematics and descriptive text about universe design concepts, principles, and functions. The goal of this educational artwork is to stimulate the mind by revealing a bit of the infinite cosmos with simple and uncluttered drawings designed to bring out some of the broader concepts used to create and sustain our marvelous universe, and to ultimately bring the student to a broader and deeper understanding of the Creator of all things, our Great God the Universal Father, by sharing with you some Truth Beauty and Goodness.


HOW IS THE COLLECTION OF MASTER UNIVERSE DIAGRAMS ORGANIZED?

Some of the diagrams naturally share a common theme, like the three Paradise diagrams. Some follow a certain sequence or timeline, such as the Origin, Destiny, Circuits, and Beyond diagrams which flow from one to the other in that order, and some are stand alone diagrams. The Master Universe collection of educational diagrams currently consists of the following titles, and are listed below according to their logical groupings. An alternate reading order is also suggested at the end.

DESIGN, CREATION AND EVOLUTION OF THE MASTER UNIVERSE

This diagram takes a look at some of the major design features and dynamics of the Master Universe that will be frequently referenced in the remaining diagrams. 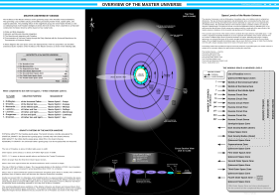 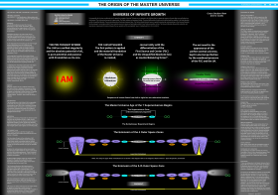 Continuing with the theme set in the Origin diagram, this diagram picks up in the present and looks forward into the far distant future when the Master Universe will become a perfected creation. 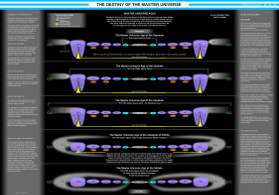 The Master Universe is a creation of the greatest mind there is, and as such displays many mind patterns and circuits. This diagram offers a magnificent view into the far distant future at the completion of the Master Universe and the phenomenal mind circuitry that connects it all together to the central Source. 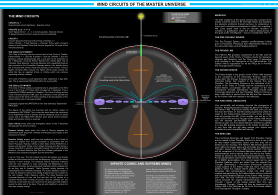 With the previous diagram offering a glimpse of the completed Master Universe, this diagram focuses on the fundamental jurisdictional boundaries and their inherent design concepts as they apply to the current and future Master Universe. 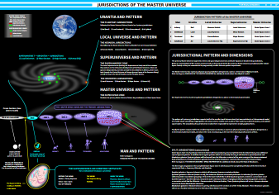 Once the Master Universe has been perfected the act of creation still marches on. This diagram picks up after the completion of the original Master Universe and examines the tremendous expansion plan to create a gigantic Macro Master Universe, the pattern of which will eventually be replicated into infinity. 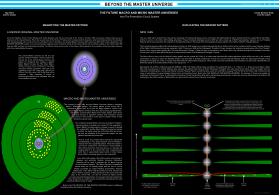 Paradise is at the center of everything and patterns are an essential aspect of most things. Without patterns there could hardly be a Creation. A startling look at patterns and their connection to human life is presented in this diagram. 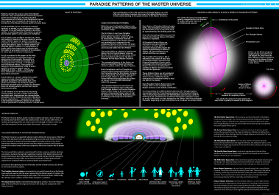 This diagram takes a closer look at some of the major features of the Master Universe in its present and completed stages. 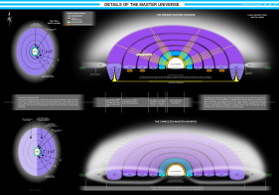 The Central Isle of Paradise is the perfect home of the Creator and the foundation of the Master Universe. Its basic design and purpose is explored in this diagram. 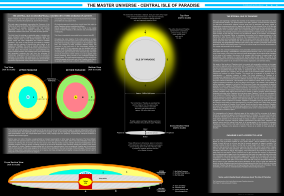 The Central Isle of Paradise is also the primary destination of all God loving beings. This diagram offers a glimpse at how Paradise is accessed and protected. 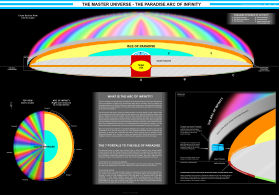 Immediately surrounding the Central Isle of Paradise is the perfect Central Universe of Havona with its 1 billion perfect spheres. An overview of this perfect creation is offered in this diagram. 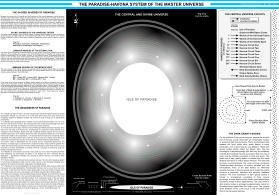 Paradise may be the center of all things but what powers it, what drives it, what is at the heart of it all? The answer is the Heart of God which lies at the very center and inner core of the enormous Central Isle of Paradise. This diagram will take you on an astounding journey to the very Heart of Paradise as well as offer more insights into that great phenomenon known as Space Respiration. 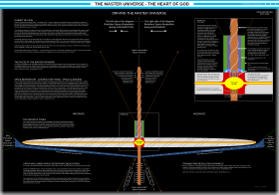 There are many functional aspects to the Master Universe and none are more integral than the role Deity plays in its successful operation and growth. This diagram explains how the major Deity roles and functions come together to create a stupendous mechanism designed to ensure the successful growth and eventual perfection of the Master Universe.

Continuing with the theme of the first Deity Mechanism diagram, part II delves deeper into Deity functions and relationships. 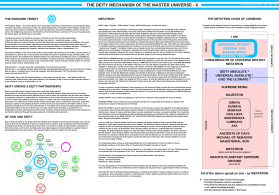 The all encompassing role of Deity begins to diverge in the Master Spirits. This diagram explores these stupendous Spirits who rule over the spiritual aspects of the current seven superuniverses. While the ultimate reach of the Master Spirit influence is destined to reach the outer edge of the furthest outer space zone, this diagram limits itself to their current influence over the Grand Universe. 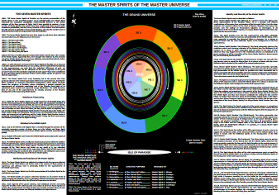 All force-energies originate from Paradise and are perfectly managed by a vast team of beings with very special abilities. This diagram explores these extra ordinary beings and their sometimes unfathomable roles and activities regarding the material aspects of all creation. 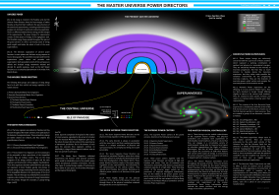 Expanding beyond the Deity Mechanism bring us to the current great administrative system of Supreme Trinity personalities spanning the Grand Universe. A summary of the Urantia Book teachings on administration is offered in this diagram. 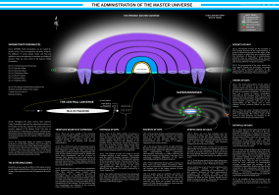 While administration takes care of the executive aspects of the Grand Universe, there is also a need for coordinating the various creative intents. A summary of the Urantia Book teachings on coordination is offered in this diagram. 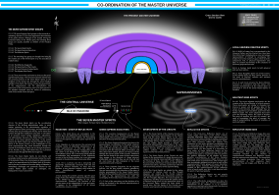 One of the most amazing functions of the Master Universe is its ability to expand and contract through a mechanism called Space Respiration. This diagram explores some of the basic aspects of this fascinating 1 billion year long process.

One of the most essential yet least understood aspects of the Master Universe are its seven gravity circuits. Each one unique and essential to the fulfillment of destiny. This diagram presents these seven circuits in a unified diagram. 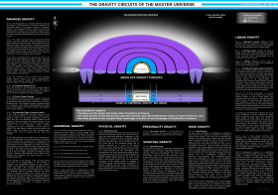 We live on an evolutionary planet, but there is another type of planet in the universe known as architectural spheres. These are custom built planets intended primarily for universe administration and education, and there are billions of them. This diagram explores the dimensions of these immense and glorious spheres and offers a glimpse into the type of life and activities they support.

Jerusem, the architectural sphere which is the capital of our Local System of Satania, is 100 times the size of Urantia. It is divided into numerous sectors. This diagram explores the sector of Jerusem called the Circles of the Angels and demonstrates how immensely large they are in comparison to the size of our own planet. 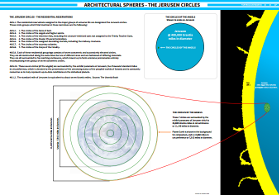 The resurrection halls of the first mansion world of Satania form a gigantic structure. This diagram presents the basic floor plan of this magnificent temple. 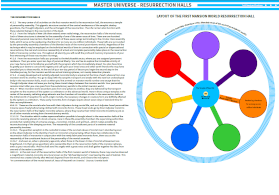 Where there are jurisdictions there are also, out of necessity, powers and principalities which govern these jurisdictions. At the highest level these systems of Master Universe governance take the form of Trinities. This diagram briefly explores the roles and circumscription of each Trinity. 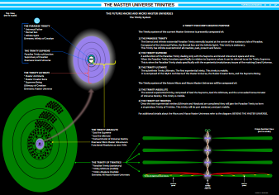 This handbook is a collection of 22 presentation slides containing additional clarifications, concepts, and real world analogies that did not make it into the diagram collection due to lack of space. 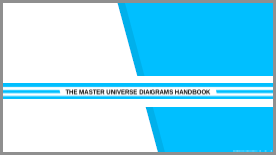 A WORD ABOUT THE DRAWING STYLE USED IN SOME DIAGRAMS

Due to lack of space on the Destiny and Details diagrams the completed Outer Space Zone 5 (OSZ 5) is displayed using a flattened rendition as it wraps around the other space zones. For a complete and more accurate rendition of the spherical shape of the completed OSZ 5 refer to the Master Universe – Circuits diagram.

The Master Universe diagrams were professionally designed with high quality printing in mind. Every reasonable effort was made to ensure that they will print successfully, but it is impossible to do print testing for every possible situation. Therefore the diagrams are offered without guarantee.

Here are a few things we learned from making our own prints. The diagrams can be viewed and read comfortably when printed as small as tabloid size (roughly 17 by 11 inches or 432 by 279 mm). We do not recommend printing smaller than tabloid size. The diagrams are scalable PDF files, and can be printed as large as your PDF software and printer will support.

Please keep the following in mind while enjoying these beautiful and thought provoking diagrams. The Master Universe is so vast and complex that it is impossible to portray what it contains in great detail with the current state of human technology. Some of the diagrams contain new revelations that have only come to light after the Urantia Book was published, so they deal with certain concepts not yet found in the Urantia Book.

While the Spirit revelators and their human collaborators have made every effort to be as accurate and forthcoming as possible in the creation of these diagrams and texts, there are limitations inherent in the media and techniques used. For example, if the Master Universe were drawn to scale with the Isle of Paradise depicted as 1 centimeter in diameter, then the diameter of the Master Universe to the outer edges of Outer Space Zone 4 would be about 150 meters across! Such scale simply cannot fit on a 76 x 53 cm canvas. Many simplifications had to be made in order to create suitable presentations at a usable size. Also, some new English terms had to be invented in order to describe certain parts of the revelations. These new terms are defined by the Glossary of Terms in the sidebar of The Origin of the Master Universe diagram. The main design focus is always to give the broad concepts and principles the attention they deserve without letting too much detail get in the way.

Much time and effort was spent by both the Spirit revelators and their human collaborators in an attempt to harmonize these diagrams with the revelations from which they are derived, but the fact remains that no one is perfect, and neither are these diagrams.

Color is used primarily to create contrast, highlight items of interest, and improve the user experience, otherwise the choice of colors has no meaning. One exception to that rule is Azure blue to designate the Paradise Trinity, as specified in the Urantia Book.

We hope you will enjoy these beautiful educational diagrams.